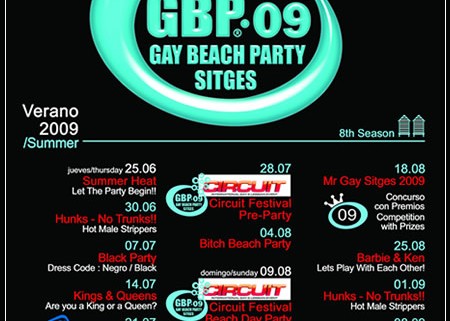 For those of you who have never been to the Beach Party in Sitges before, check out our Best of Gallery Below for 2008!

Further details can be found at the Gay Beach Party’s official site here.

March 26, 2014
Just round the corner from the gay beach, Avenida Sofia Hotel features a spa and a rooftop pool and bar. Its stylish rooms have contemporary decor and some offer sea views.
END_OF_DOCUMENT_TOKEN_TO_BE_REPLACED
https://www.gaysitgesguide.com/wp-content/uploads/Avenida-Sofia-Hotel-Boutique-Spa.jpg 333 500 Editor https://www.gaysitgesguide.com/wp-content/uploads/logo-gsg.png Editor2014-03-26 11:48:382017-06-03 13:25:30Hotel MIM Sitges