Gay Sitges Guide will bring you up to date information on Sitges as and when we receive it regarding the travel situation in Spain. 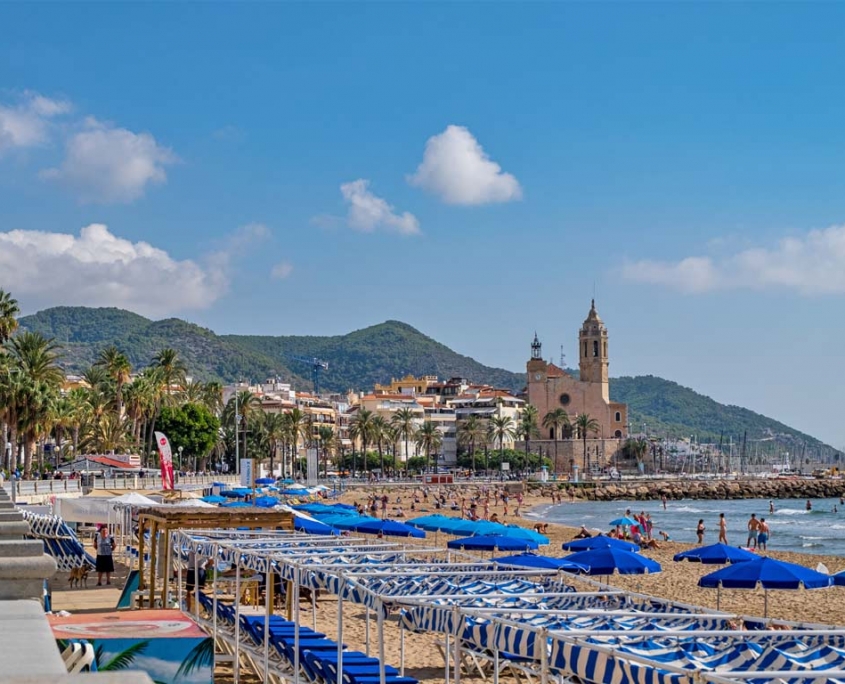 As if Wednesday Dec 9th

Catalunya is still in Phase 1 of the deescalation phase given the continued presence of the virus.  On the 3rd of December, Health minister Alba Vergés announced on Thursday that Catalonia will stay in phase 1 for two more weeks until December 21.

The delay in the phase change might mean that Catalonia will probably be in phase 2 and not 3 for Christmas. Yet, this will not prevent family meals from happening.

In Sitges, the bars and restaurants will be open for Christmas Eve and New Year’s eve until 1am. Reservations are highly recommended as capacity will be between 30 and 50 percent depending on whether Catalunya enters the next phase before Christmas.

We are awaiting updates from Sitges businesses regarding their plans for NYE festivities.

Traveling for such gatherings across Catalonia and to other areas in Spain will be allowed in the Christmas key dates (December 24 to 26, 31, and January 1 and 6) no matter what de-escalation phase is in force at that time, as made clear by Vergés in the press conference.

Authorities said that the plan announced on Wednesday on the holidays remains unaffected,

These includes the fact that the night curfew will be delayed until 1.30 am on December 24 and 31, and until 11 pm on January 5, the eve of the Three Kings Day.

Later on Wednesday, the Spanish government announced a ban on travel between regions from December 23 to January 6, but will allow visits to “relatives and next of kins.”

Countries with allowed entry to Spain

Travellers from the rest of the European Union (EU) are allowed to enter without quarantine requirements.

HOW TO GET TO CATALONIA

Arrivals in Catalonia can be done by plane, through the international airports Josep Tarradelles, Barcelona El Prat, Girona-Costa Brava and Reus, as well as by rail and road.

At the moment, the activity at Josep Tarradelles Barcelona-El Prat Airport is being redirected to Terminal 1, where all the activity is expected to be concentrated from 1st December. More information can be found at this link.

You can find more information on Catalonia’s airports at the AENA website.

Currently, ships and cruises are not allowed to enter into Catalan ports. For further information, please can check the official website of the Port of Barcelona.

Access control measures at entry points of the country

1. All travellers coming from outside Spain, by air or sea transport, must fill in an electronic public health form before starting their journey. This can be found at the following link  or through the SPAIN TRAVEL HEALTH-SpTH application (Android and Apple). Once completed, a QR code will be sent to the traveller that must be presented upon arrival in the country. All companies or selling-tickets agents must inform travellers at the beginning of the sales process of the obligation to present the public health form at the airport or port of destination.

2. It is also mandatory to present a PCR test for SARS-CoV-2 with a negative result performed within 72 hours prior to the start of the trip for all those passengers from countries considered a risk area. In this sense, are considered risk areas all those territories and states with a cumulative incidence of cases greater than 150 per 100.000 inhabitants in the 14-day projection or, in the case of the European Union (including the United Kingdom), those countries recommended by the European Council.

3. Before entering the country, passengers arriving by air or sea must pass a documentary check, a visual check of the passenger’s condition and a temperature check that will be done routinely to identify those with a temperature of 37.5ºC or higher.

4. Travelers suspected of COVID symptoms or other transmission pathologies, based on the public health form or the control carried out, will be subjected to a new health assessment to determine if they present a risk to public health. If confirmed, health alert protocols will be activated to refer the traveller to the appointed health centre.

HOW CAN I TRAVEL AROUND CATALONIA

There is also a restriction on night mobility that does not allow the movement of people between 10pm and 6am.

You can see the exceptions to these limitations at this link.

In parallel, it should be noted that masks are mandatory inside vehicles, such as cars, buses or trains, as well as in train and bus stations.

They function normally, although in areas outside major cities, some restrictions might be found.

For further information on the state of taxis in the area of Barcelona and its surroundings, please check this link.

Bus lines function with normality, although in specific lines, some limitations or changes in schedules should be expected.

At the moment, Catalonia is at a time of descaling restrictions, linked to the permanent control of the epidemiological situation, so that every 15 days its measures are reviewed in order to reduce, maintain or increase them, according to the evolution of the pandemic in its territory.

All accommodations can open and the Government of Catalonia and the Spanish Institute for Tourist Quality have provided them with the respective protocols to ensure safety and the relevant health measures.

Bars and restaurants are allowed to open from 6am to 9:30pm with a maximum occupancy of the interior spaces of 30% and 100% in the case of terraces.

The minimum distance between tables must be 2 meters and no more than 4 people per table are allowed except in those cases where they are from the same coexistence bubble.

All shopping centers and venues are closed as well as the activity of trade fairs throughout Catalonia has been suspended.

Visits to museums, monuments, other cultural venues and events

It is allowed to open to the public museums and exhibition halls up to 50% of its capacity, as well as cinemas, theaters, auditoriums and concert halls also up to 50% of its maximum capacity and never exceeding a maximum of 500 people.

The activities of fairs and theme parks, leisure spaces such as casinos, bingo and recreational spaces, congresses, conventions and major festivals of the municipalities are suspended.

It is requested to maintain a safety distance between people of 1.5m and a safety space of 2.5m2 per person.

Distances of less than 1m cannot be held indoors, except between people who travel in a group, or that have close contact on a regular basis.

The use of face masks is mandatory for everyone over 6 years old when outside on the street and outdoors as well as in any public space outdoors or indoors and while using public transportation.

The use of face masks is not mandatory for those suffering any type of respiratory illness or difficulty that may be exacerbated by the use of such face mask.

There are some exceptions while practicing sports, while eating or drinking, while at the beach or swimming pool and while you are surrounded by the people in your household.

For additional information, please check the website of the health department of the Catalan Government.

Smoking is not allowed on public roads or in outdoor spaces when a minimum distance of 2 meters between people cannot be respected.

Yes and no! All major mass gatherings for Carnival 2021 have been cancelled. There will be no main parade on the Sunday of Tuesday. The Carnival Commission have plans to produce socially distant events, but it certainly won’t include any mass gatherings.

It is not yet clear how the situation will unfold with regard to the bars of Sitges and their annual parties and Carnival festivities. As soon as things become clear we will provide an update.

Sitges still remains open and we are welcoming all guests who can and are willing to travel. Restaurants and bars are respecting social distancing rules and the hotels and apartments are still open with some great offers. There has never been a better time to pre-plan your next trip and grab a deal.

The music bars such as XXL, Soho and Privilege remain closed. Queenz cocktail bar (on the right hand side) is open from Thursday to Sundays. Parrots Pub and terrace is open each day. All bars must close by 1am. Customers can not sit down at at terrace or enter a bar after 00.00.

Sitges Carnival has cancelled all mass events, such as the parades and street parties. They promise a more socially distant event with virtual programs and some smaller events.

Do I have to wear a face mask in Sitges?

Catalonia’s Civil Protection have stated that the use of face masks is mandatory throughout Catalonia to prevent the spread of the coronavirus.

Government spokesperson stated that the rules apply in “both public and private” spaces, even when the safety distance of 1.5 meters can be guaranteed. You will need to carry a mask with you at all times and wear it when walking the streets, getting to and from the beach, shopping in supermarkets and stores and going to and from restaurants and bars.

Sitges is out of lock-down and the state of emergency is over. The beaches are open. All the terrace bars are open. The night bars are open with reduced capacity.  Masks are required at all times.

This is the most common question we have from visitors. As international flights return to Barcelona El Prat, we expect an increase in the number of visitors.  No where in the world is risk-free. It also depends on your health status. If you are in an at-risk category, you need to carefully consider your decision to travel. We suggest you book a hotel or apartment with a flexible cancellation policy. 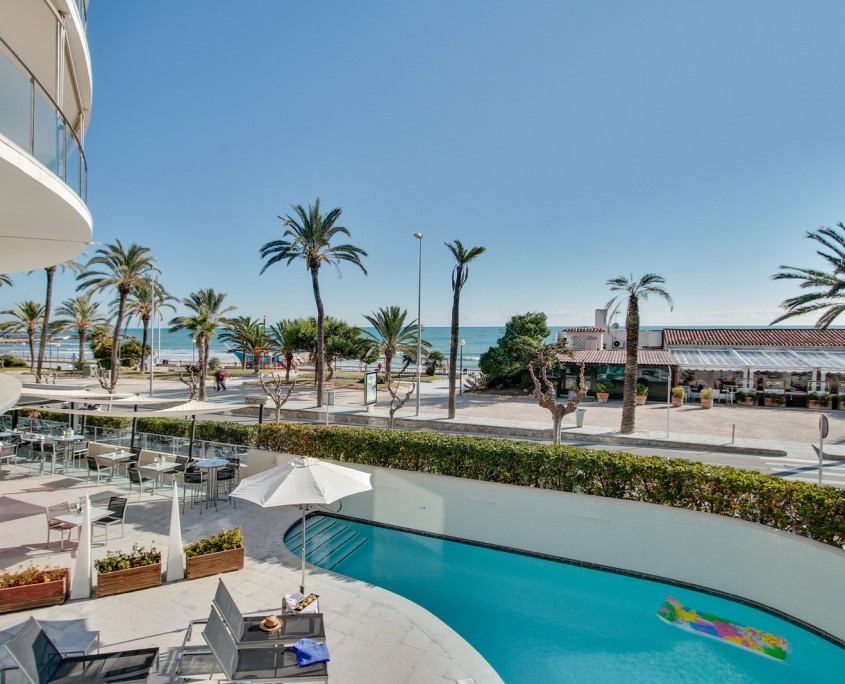 The Hotel Calipolis offers great seafront rooms and a unique location in Sitges.

Currently the beaches are open for all activities. The beaches of Sitges opened for sunbathing on the 2nd of June.

Book a hotel room by the beach, The Hotel Calipolis offers amazing views! 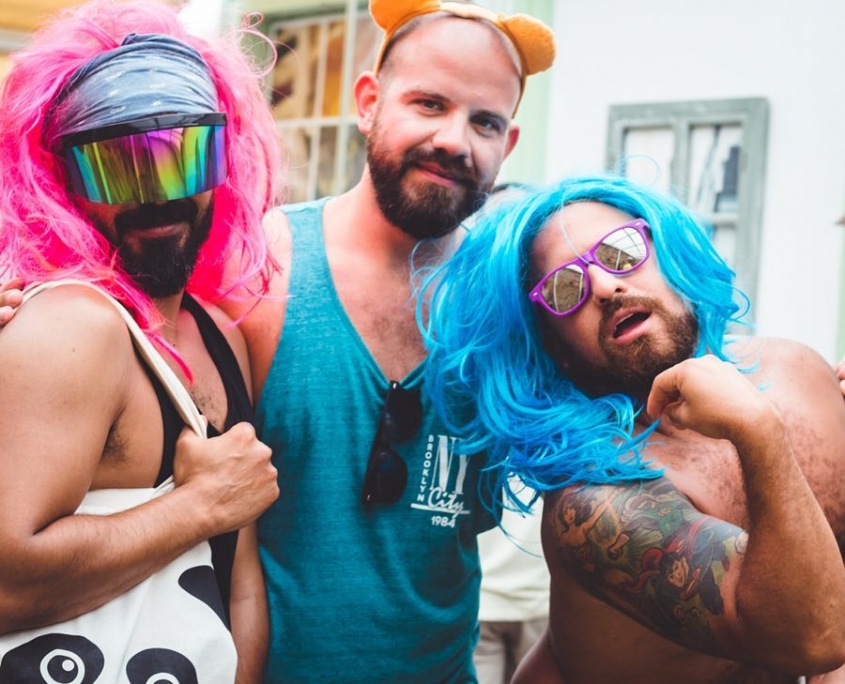 Bears Week September Edition is set to go ahead, with some changes to be confirmed.

Which events have been cancelled/postponed?

The Sitges Tapas Festival, The May Bear Week and Sitges Pride have all been postponed. The Corpus Flower Festival street decorations have been cancelled.

As of July 21st Sitges Bears Week – Organizers have been told by the council that the bear village on the sea front will not be permitted, however as many people are already traveling for the event, organisers have said they will work on other events that will allow for social-distancing.

An official statement reads: “Dear friends, as we have been reporting as the situation of COVID19 is progressing differently in different places. The Bears Sitges Association has decided not to convene its own activities for this year. However, for the many Bears who have decided to keep your holidays in Sitges, some of our sponsors and friends have decided to offer some activities, services and special offers for you all”

So essentially, while the bears week village and events have been cancelled, Sitges will still be open for business and many bears will visit during these dates.

Fiesta Mayor has also cancelled all the traditional dances and street parades and is working on a new program of events.

Do you have dates for Sitges events in 2021? 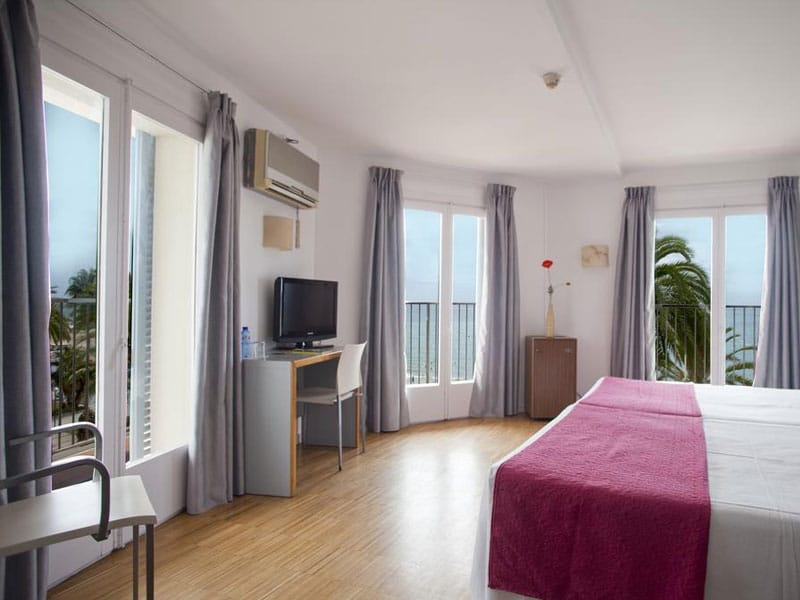 March 26, 2014
Just round the corner from the gay beach, Avenida Sofia Hotel features a spa and a rooftop pool and bar. Its stylish rooms have contemporary decor and some offer sea views.
END_OF_DOCUMENT_TOKEN_TO_BE_REPLACED
https://www.gaysitgesguide.com/wp-content/uploads/Avenida-Sofia-Hotel-Boutique-Spa.jpg 333 500 Editor https://www.gaysitgesguide.com/wp-content/uploads/logo-gsg--300x123.png Editor2014-03-26 11:48:382017-06-03 13:25:30Hotel MIM Sitges

Top 5 places to stay in Sitges Scroll to top
×