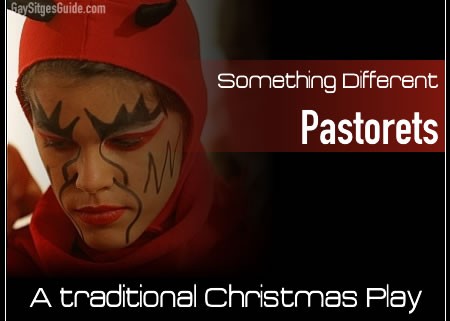 The Catalans really do have their own take on Christmas.

Yes, they do the same things as everywhere else, Christmas Trees, lights and presents. But there's also the hugely popular craze of Els Pastorets. Think Cludo-like mystery play, except they concentrate on the story of the nativity, and run in theatres and local community centres all over the city in December and January. This is Catalunya though, so they're not your standard primary-school- show-complete-with-video- wielding-parent. More like a cross between panto and religious tableaux, there can be fireworks, horned devils and winged angels flying from the ceiling. Not to be missed.

There are several on in Barcelona, but we recommend the Pastorets De Ribes which is held in San Pere De Ribes, just a few minutes drive from Sitges

March 26, 2014
Just round the corner from the gay beach, Avenida Sofia Hotel features a spa and a rooftop pool and bar. Its stylish rooms have contemporary decor and some offer sea views.
END_OF_DOCUMENT_TOKEN_TO_BE_REPLACED
https://www.gaysitgesguide.com/wp-content/uploads/Avenida-Sofia-Hotel-Boutique-Spa.jpg 333 500 Editor https://www.gaysitgesguide.com/wp-content/uploads/logo-gsg.png Editor2014-03-26 11:48:382017-06-03 13:25:30Hotel MIM Sitges