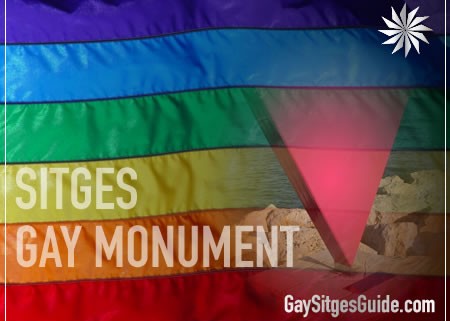 Sitges recently unveiled the first monument dedicated to Gay people in Spain. The monument commerates the 10th anniversary of a particularly dark period in Sitges relationship with gay people. In 1996, the municipal government dediced to monitor the activity of gay people on the beaches of Sitges.

Unsuprisingly, this decision was met with uproar by the local gay community. Relations between gay people and local government institutions was frosty at best throughout that period. Tension mounted at the end of September when a gay waiter was attacked and beaten by a group of Neo Nazis. Local gay organisations mounted a protest on the streets and eventually the decision to monitor activities on the beach was dropped.

You can watch the unveiling of the monument here.

The monument bears the inscription, “Sitges. 1996 – 5 October 2006. Against homofobia”. In the shape of an inverted pink triangle, the monument itself looks a bit dated in our opinion, however it is still worthy of note as a move in a positive direction.

March 26, 2014
Just round the corner from the gay beach, Avenida Sofia Hotel features a spa and a rooftop pool and bar. Its stylish rooms have contemporary decor and some offer sea views.
END_OF_DOCUMENT_TOKEN_TO_BE_REPLACED
https://www.gaysitgesguide.com/wp-content/uploads/Avenida-Sofia-Hotel-Boutique-Spa.jpg 333 500 Editor https://www.gaysitgesguide.com/wp-content/uploads/logo-gsg--300x123.png Editor2014-03-26 11:48:382021-06-21 10:28:13Hotel MIM Sitges