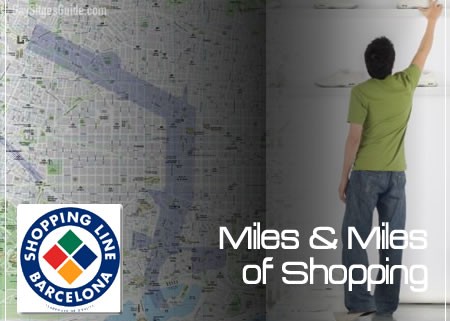 Our night in Barcelona was a bit of an excess as we said… so what better way to round it off than by flashing some plastic and visiting Barcelona's Shopping Line!

The city's main shopping thoroughfare is known as the Barcelona Shopping Line. Its 5 mines long and is mostly pedestrianised stretching from the harbour to the uptown Diagonal district, via La Rambla, the old town, the Gothic Quarter and the Passeig de Gràcia and Rambla de Catalunya.

Added to that, it is officially a Shopping Year in Barcelona from March 2006 to 2007…so go on treat yourselves… just look at what you will be wearing next year. Yes, the Summer 2007 range of clothing from top designers such as D&G and D-Squared is already on-sale in BCN.

Bright Colours are back in Vogue for 2007…

This Madonna T-Shirt will become the must have item for Summer in Sitges next year… expect lots of copies…so check your boy has the original before you rip it off him… happy Shopping.

DSquared and D&G are stocked in Cortes Ingles in Barcelona and in Oscars in Sitges.

March 26, 2014
Just round the corner from the gay beach, Avenida Sofia Hotel features a spa and a rooftop pool and bar. Its stylish rooms have contemporary decor and some offer sea views.
END_OF_DOCUMENT_TOKEN_TO_BE_REPLACED
https://www.gaysitgesguide.com/wp-content/uploads/Avenida-Sofia-Hotel-Boutique-Spa.jpg 333 500 Editor https://www.gaysitgesguide.com/wp-content/uploads/logo-gsg--300x123.png Editor2014-03-26 11:48:382021-06-21 10:28:13Hotel MIM Sitges

The perfect location for your next holiday! Scroll to top