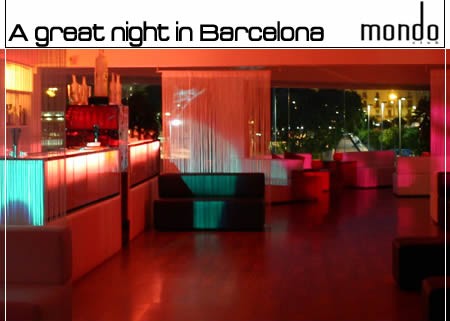 Its very easy to over-do things in Barcelona… that's why its always welcoming to return to Sitges to relax… However you have to let your hair down now and then and believe us, there is no better city to do it in than BCN.

The blurring of gay and straight clubs continues in Spain. Yes, there are clear distinctions and you can go to a “Gay Only” club…. but in Barcelona, that seems to happen later on. Most people begin the night in mixed-company and tend to go to the very happening clubs of the moment. One such club is Mondo. Expect lots of hot boys and girls pouring out of designer gear and looking fab.. which, to be honest, is why you want to go there!

You will find Mondo Club by the water on Moll d'Espanya s/n, in the IMAX building.

The Pacha clubs are world renowned… (after all their birthplace was in Sitges)… but in Winter you have to pay a trip to the Pacha BCN. Watch out for Sunday nights for the Pussy Deluxe….. Shows are put on by the Sex and Millions Group which have to be seen to be believed.

If after all that you are still ready for more… head to Metro… Barcelona's official top gay club. Opening hours : Every day from 2 am. On Monday: in the nights of cabaret, Tuesday: Sexy boys, on Wednesday: big party, on Thursday: bingo, on Friday Saturday and Sunday.

Metro is 100% gay open every day. It has two rooms in the same space, five bars, dark room, videolounge. Dance music, house with resident dj's Bratt, Cani in the mean room and daily spectacles, music a little more “petarda” in the second room.

March 26, 2014
Just round the corner from the gay beach, Avenida Sofia Hotel features a spa and a rooftop pool and bar. Its stylish rooms have contemporary decor and some offer sea views.
END_OF_DOCUMENT_TOKEN_TO_BE_REPLACED
https://www.gaysitgesguide.com/wp-content/uploads/Avenida-Sofia-Hotel-Boutique-Spa.jpg 333 500 Editor https://www.gaysitgesguide.com/wp-content/uploads/logo-gsg--300x123.png Editor2014-03-26 11:48:382021-06-21 10:28:13Hotel MIM Sitges

Shopping for Summer in 2007 Scroll to top