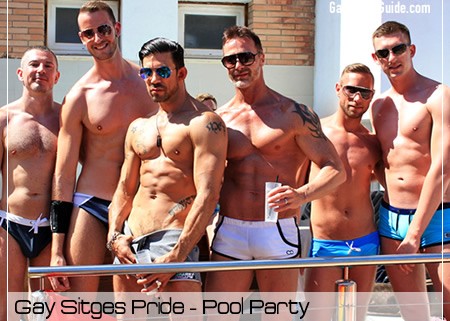 The party was SOLD OUT, with the pool full of hot guys from around the world.

A lavish buffet reception was also provided by the hotel.

The ES Collection boys posed for photos with guests and DJ Mr Chi was setting the party mood with his distinctive sound.

Guests commented afterwards that it was on of their favorite events, so you can expect a even bigger pool party for Sitges Pride 2014.

The Hotel Antemare is already taking bookings for Sitges Pride next year.

Dates for next year’s party are still being finalised, but we will be emailing everyone who attended this year with a special promotion as soon as we know the details.

Check out the photos of Gay Pride Sitges’ Pool party below. 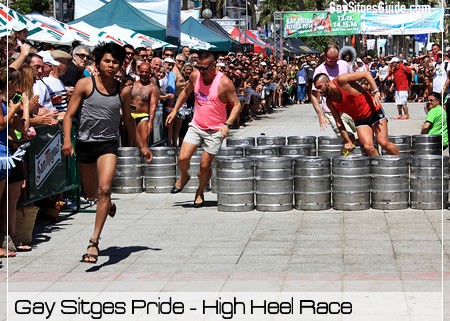 The high heel race took place on Sunday June the 16th at 3.30pm.

The event was presented by Miss Pandora, who despite having no microphone (due to technical difficulties), managed to host an exceptional event that is proving more popular every year.

This year’s race was once again kindly sponsored by Parrots Pub. They also made it a little bit more difficult…. in fact, we would say it was more of a steeple chase than a high-heel race!

The winner was one of the dancers from singer Olaya’s dance troop who performed on Saturday Night.

Check out the photos of the high heel race on Gay Sitges Guide below. 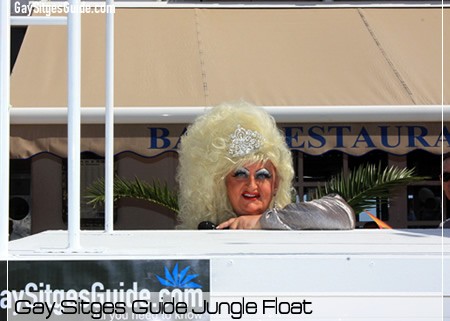 Note, as sponsor and program director of the stage and parties, coverage of the pride events will be limited on the blog. We have more than 10 photographers covering the Pride so follow the official Facebook page and the Gay Sitges Guide Facebook page for daily updates until the end of pride.

A huge thank you to Lady Diamond and her Jungle boys for putting on an amazing performance during Sitges Pride Parade this year.

Believe it or not, it was hotter on the paseo this year than it was in July last year. Temperatures have soared during Sitges Pride this year.

The parade had more than 1,000 participants on 23 floats from the various bars, clubs and restaurants in Sitges. Not bad for our little village.

The parties will continue into the night with the Decadanse Party taking place at Trailer on Saturday night.

Check out the photos of Lady Diamond on the Gay Sitges Guide float below. 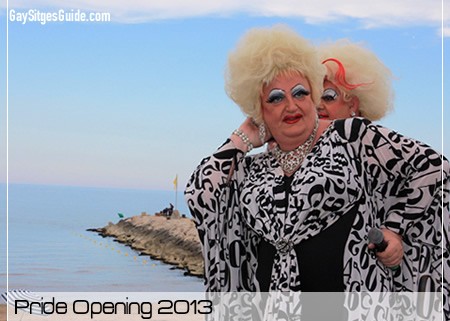 The Gay Village opened to a full paseo on Thursday during Sitges Gay Pride.

More than 3,500 people packed the seafront to watch Thursday’s shows.

Lady Diamond, Miss Ruby and Gayjet had the privilege of opening the festivities.

The Gay Village will host more than 50 different shows and events throughout the pride festivities.

Headline acts include tributes to Tina Turner and Take That. The Gypsie Kings will be performing live on Stage on Saturday June 15th at midnight.

Check out the photos of Sitges Pride using the link below. 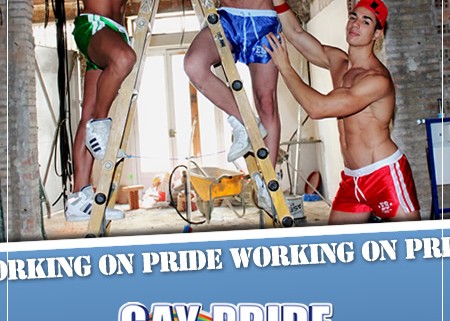 The scheduling and planning for Gay Sitges Guide 2013 is already underway. Except even bigger acts, more parties and some new and interesting surprises for the 4th year of Pride!

And remember – Sitges Pride 2013 takes place from the 13th to the 17th of June! Check out the coverage of this year’s pride and see what you will be missing if you don’t make it!

Remember you can get some great deals on apartments and hotels. The earlier you book, the better your view! 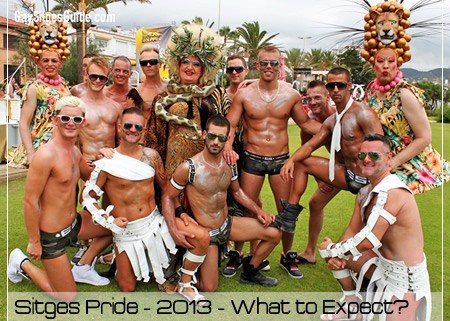 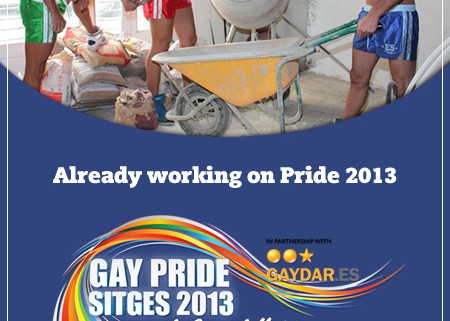 The third Sitges pride was a huge success with more than 60,000 people attending the event. Next year’s Pride will move to JUNE! Yes, the dates are confirmed. Sitges Pride 2013 will kick off on Thursday the 13th of June and run for 5 days until the 17th. The parade will take place on Saturday the 14th of June.

Hotels are already receiving bookings. This year’s event was at 100% capacity and we expect even more visitors for Pride 2013. So get booking now! 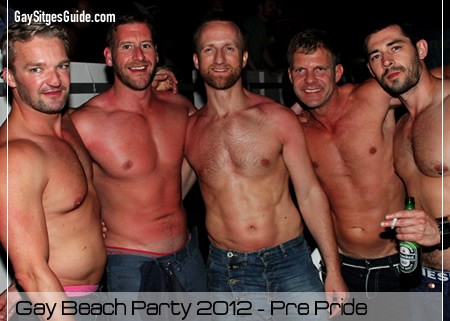 And the first big party of the event was the Pre-Pride-Party at L’Atlantida.

It was the second night of the season and the club was full of guys and girls from around the world.

All of them were here to celebrate the kick off of Sitges Pride!

The event is expected to attract record numbers this year.

And the atmosphere at the Gay Beach Party was electric.

This is going to be one party to remember!

And of course L’Atlantida will be hosting a special beach day event on Sunday during Pride.

You will be able to purchase advance tickets and special group discounts at the ticket office in the Gay Village from Thursday.

Check out the photos of the party on the official Gay Beach Party website below. 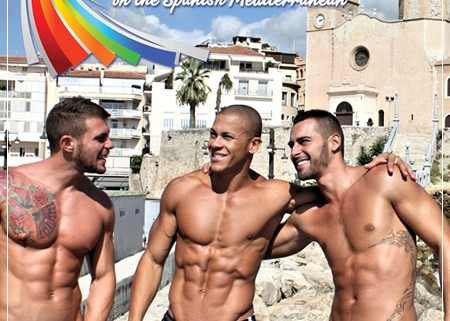 After much delibaration and ensuring no conflicts with either Barcelona or Madrid Pride, the 2012 dates for Sitges Pride have been announced. The event will take place from the Thursday the 5th of July to Monday the 9th of July.

The main parade will take place on Saturday the 7th of July. The Gay Village will once again form the backdrop of the 5 day’s of parties. Expect an even bigger line up of live acts and entertainment, more events, the return of an even bigger pool party and of course the Party in the Park…not to mention all of the events taking place in the gay bars, clubs and restaurants of the village.

Last year hotels were at 100% capacity so we would advise you to book your hotel now with us for the lowest rate guaranteed!

Seafront Apartments are always the first to become booked out in Sitges, so if you want a view of the parade, don’t delay and book now! 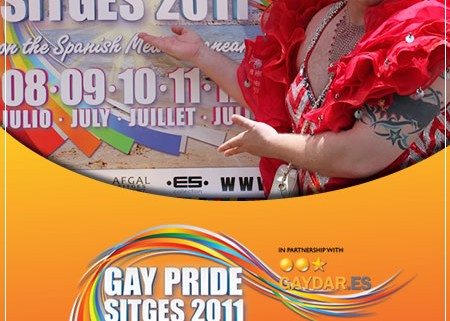 Last weekend, Gay Pride Sitges spent the weekend in Maspalmoas at the annual Gay Gran Canaria Pride. The event, which attracted thousands of visitors from around the world was the perfect place to promote the upcomming Gay Pride Sitges this July.

A huge thanks to all of the volunteers, the dancers, the AFGAL members who attended and assisted, Andy S for the photos and of course Miss Ruby for keeping the boys entertained throughtout the weekend!

You can check out more than 1,000 photos taken in the bars, clubs and streets of Masplaomas on Gay Gran Canaria4u.com below.

March 26, 2014
Just round the corner from the gay beach, Avenida Sofia Hotel features a spa and a rooftop pool and bar. Its stylish rooms have contemporary decor and some offer sea views.
END_OF_DOCUMENT_TOKEN_TO_BE_REPLACED
https://www.gaysitgesguide.com/wp-content/uploads/Avenida-Sofia-Hotel-Boutique-Spa.jpg 333 500 Editor https://www.gaysitgesguide.com/wp-content/uploads/logo-gsg--300x123.png Editor2014-03-26 11:48:382021-06-21 10:28:13Hotel MIM Sitges