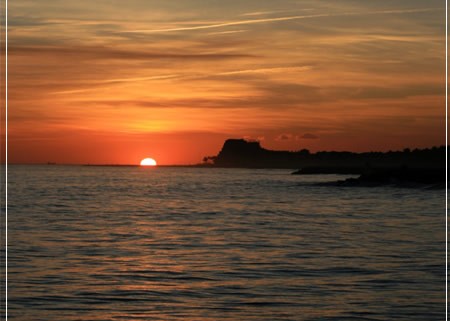 The sun sets on another beautiful winter's day in Sitges…as the town begins to prepare for the arrival of the Three Kings for Los Reyes de Magos, Epiphany or Three Kings “Tres Magi” Day. The Photo Gallery is now online.

The lights were dimmed all accross Sitges so that people could greet the arrival of the Three Kings to the backdrop of a spectacular lighting display placed on Santa Tecla Church.

The band played some surreal music as the light show continued.

Only in Sitges would the church go so Pink!

Lucrecia was our host for the evening. She is a famous Cuban Style singer and is a major star on Spanish Television.

The Three Kings are even bigger than Santa Claus over here.

Children queue up for hours to give their letters to their favourite King to ask for their present of choice.

The Kings arrived in spectacular fashion. You know the sweeping staircase from the Church to La Fragata? Well it became a stairs of fire as the Kings made their way onstage.

As the kings arrived the light-show continued and the fireworks exploded over our heads!

The horse riding through the streets was stunning. Sweets were thrown from huge bags as children clambered around the streets with big bags of treasure!

Even the Kings themselves got into the act. Being pelted with sweeties whilst trying to take photos amongst a mad crowd was definitely an expereince worth repeating. The sweets were lovely by the way!

There simply is no better way to start the New Year than with this wonderful celebration that continues into the weekend! See you at the parties boys!

March 26, 2014
Just round the corner from the gay beach, Avenida Sofia Hotel features a spa and a rooftop pool and bar. Its stylish rooms have contemporary decor and some offer sea views.
END_OF_DOCUMENT_TOKEN_TO_BE_REPLACED
https://www.gaysitgesguide.com/wp-content/uploads/Avenida-Sofia-Hotel-Boutique-Spa.jpg 333 500 Editor https://www.gaysitgesguide.com/wp-content/uploads/logo-gsg--300x123.png Editor2014-03-26 11:48:382021-06-21 10:28:13Hotel MIM Sitges