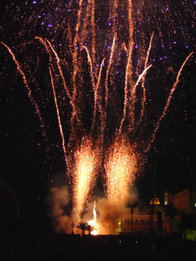 The Fireworks I spoke of last week were indeed amazing. I have seen Firework Displays all over the world and whilst this one was small in size, it was spectarular for its sheer intimacy. We were all on the beach in San Sebastian and the fireworks were literally going off right over our heads. Unlike shows in Sydney and Washington where you are far from the action, these fireworks were right on top of us! Every single firework was set off to a musical score and the entire event was organised by one of the world's top fireworks artists, who also happens to live in Sitges.

The fireworks were centred around a barge that was floating a few hundred metres out to sea. Those lucky enough to have a boat of some sort (we did see some boys on a li-lo we must admit) had the best views.

The pre-show event was a little disappointing in that the seating area for the VIPs did tend to block off the view of the spectators who did not have a seat.

All in all, another great reason to look forward to the main festival, 'Fiesta Mayor' in August.

March 26, 2014
Just round the corner from the gay beach, Avenida Sofia Hotel features a spa and a rooftop pool and bar. Its stylish rooms have contemporary decor and some offer sea views.
END_OF_DOCUMENT_TOKEN_TO_BE_REPLACED
https://www.gaysitgesguide.com/wp-content/uploads/Avenida-Sofia-Hotel-Boutique-Spa.jpg 333 500 Editor https://www.gaysitgesguide.com/wp-content/uploads/logo-gsg--300x123.png Editor2014-03-26 11:48:382021-06-21 10:28:13Hotel MIM Sitges