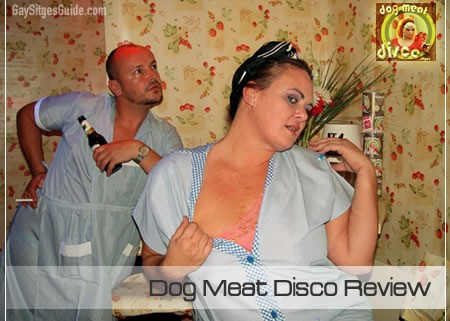 This post was a little late… due to the overindulgance of your's truly at the Dog Meat Disco. The night was excellent, the music was eclectic and the hosts were amazing. Glenn and Tutu put on a night that is definitely worth a visit. It take's place the first Saturday of every month in Privilege.

Attracting quite a mixed crowd, the atmosphere is relaxed and refreshing!

Tutu's performance was a sight to see…. you can see her in the performace gallery!

Greg and Peter enjoying the night!

We don't know where Glenn pulled this one from!

Sammy struts his stuff in Trailer later on…

Later on… in Trailer Disco, we met the boys from B-Side.

Be sure to check out the gallery for more photos!

March 26, 2014
Just round the corner from the gay beach, Avenida Sofia Hotel features a spa and a rooftop pool and bar. Its stylish rooms have contemporary decor and some offer sea views.
END_OF_DOCUMENT_TOKEN_TO_BE_REPLACED
https://www.gaysitgesguide.com/wp-content/uploads/Avenida-Sofia-Hotel-Boutique-Spa.jpg 333 500 Editor https://www.gaysitgesguide.com/wp-content/uploads/logo-gsg--300x123.png Editor2014-03-26 11:48:382021-06-21 10:28:13Hotel MIM Sitges

Still mild and warm in Sitges! Scroll to top
Send this to a friend