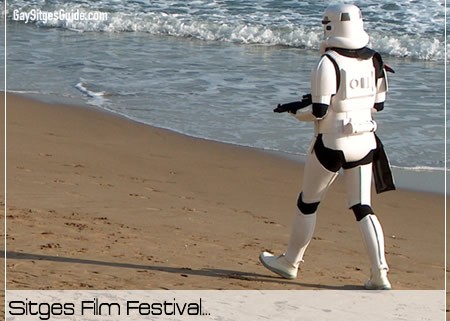 Sitges felt more like it was in the middle of August than October this weekend as crowds from around the world flocked to see some of the 13 world premieres being screened at the 40th International Film Festival.

The event, which celebrates the sci-fi, horror and fantasy genre, is one of the biggest of its kind in the world. This year sees previews of the digitally remastered Blade Runner which celebrates its 25th anniversary. Its one of the best and most original Sci-fi movies ever made. You can preview the movie trailer below.

The event lasts for the entire week! The main hub is the Hotel Melia which looks more like Hollywood than Sitges!

With all the movies on screen its hard to get to see them all, but our favourite has to be “Stardust” starring Robert De Niro, Michelle Pfeiffer,Claire Danes and Sienna Miller. Watch the movie trailer below.

For further information check out the events section of Gay Sitges Guide.com

March 26, 2014
Just round the corner from the gay beach, Avenida Sofia Hotel features a spa and a rooftop pool and bar. Its stylish rooms have contemporary decor and some offer sea views.
END_OF_DOCUMENT_TOKEN_TO_BE_REPLACED
https://www.gaysitgesguide.com/wp-content/uploads/Avenida-Sofia-Hotel-Boutique-Spa.jpg 333 500 Editor https://www.gaysitgesguide.com/wp-content/uploads/logo-gsg--300x123.png Editor2014-03-26 11:48:382021-06-21 10:28:13Hotel MIM Sitges