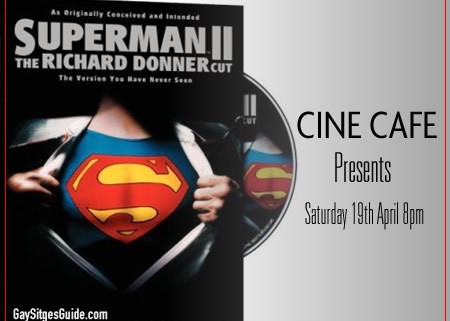 Many of you may have seen Superman 2 many times before – either on the big screen or at home. But how many of you know about its very troubled history. Originally large parts of Superman 2 were filmed back to back with the first film, by the same director, Richard Donner. However, after disagreements with the producers, Donner was fired before the second movie was finished and Richard Lester was bought in.

In “geek” mythology the Donner Cut of Superman 2 was like a holy grail, often talked about thought out of reach and never to be seen. Now thanks to DVD sales, Warner Bros. financed the finishing of this alternate version of the movie and Cine Cafe have it for you this week, on Saturday.

Its a very different film with a completely different opening (no bomb on the Eiffel Tower) and a vastly different ending. Come and judge for yourself if you think the producers made the right choice 28 years ago!!!

March 26, 2014
Just round the corner from the gay beach, Avenida Sofia Hotel features a spa and a rooftop pool and bar. Its stylish rooms have contemporary decor and some offer sea views.
END_OF_DOCUMENT_TOKEN_TO_BE_REPLACED
https://www.gaysitgesguide.com/wp-content/uploads/Avenida-Sofia-Hotel-Boutique-Spa.jpg 333 500 Editor https://www.gaysitgesguide.com/wp-content/uploads/logo-gsg.png Editor2014-03-26 11:48:382017-06-03 13:25:30Hotel MIM Sitges